Eight years after the first Summit Meeting of the Berlin Process for the Western Balkans, the heads of government of Albania, Bosnia and Herzegovina, Kosovo*, Montenegro, North Macedonia, and Serbia met early this month with senior representatives of the European Union and its member states, international and regional bodies and organizations in Berlin.

“It is with great honor that I am standing here in front of you today, to thank you all for the support provided to RYCO, and for the hope that the Berlin Process is giving to the Region. The political will you expressed at the very beginning of this process brought to fruition significant achievements. Yet, we believe that now is the time to renew your political willingness; it is time to once again openly reaffirm your strong commitment to a prosperous and integrated WB region”, with those words Secretary General of RYCO, Mr. Albert Hani, started his speech to the heads and stakeholders from the EU. Mr. Hani also made a great intro for youth representatives who had a chance to present the Western Balkans Youth Forum Declaration, a product of the high-level deliberations at the Forum, part of the Berlin Process 2022, to the respective audience.

Highlighting the importance of including youth in decision-making processes, especially in three thematic areas of this year’s Youth Forum: resilient democracy, inclusive security and peace, and sustainable living, Anja Jokić, Edis Paprashtica, Blazhen Maleski, Andrea Mićanović, Meris Bećović, and Franceska Muco proudly shared the main points of the Declaration, which was a result of a four-day joint work of over 70 young people from all over Western Balkans. The Declaration provides a youth perspective on the most important issues of today, such as resilient democracy, inclusive peace and security, and sustainable living.

“RYCO has been facilitating the dialogue between young people from the Western Balkans ever since it was founded. Moreover, RYCO amplifies the youth voices making them heard at high political levels such as the Berlin Process. This year was special as it was the first time that youth representatives had been invited to join the Summit and got an opportunity to meet the leaders of the EU and Western Balkans to present them the conclusions of the Youth Forum. This is a significant step forward in regard to youth participation and we hope this will remain the practice in the future. Young people are ready to take on more responsibilities and be part of the solutions. RYCO is fully committed to supporting them in this role,” as Mr. Hani stated, sharing his joy over the establishment of the WB cultural fund:

“The establishment of the WB cultural fund administered by RYCO, is another big step forward towards opening doors for creating new successes stories. We are thankful that youth is not just one of the many topics being discussed here, but that young people themselves are taking an active part in the Berlin Process which, as such, brings new hope to the region and that, moreover, we as RYCO are honored to have been entrusted with facilitating this.” 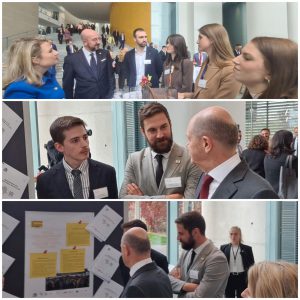 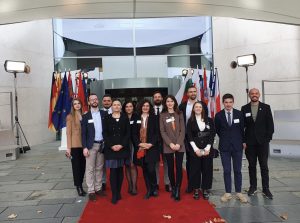 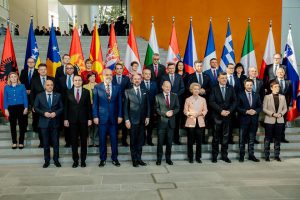 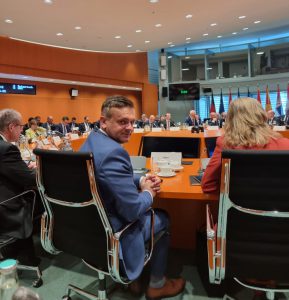 The Western Balkans Youth Forum of the Berlin Process 2022 is organized by the Regional Youth Cooperation Office in partnership with Franco-German Youth Office and Crossborder Factory. The Forum is supported by the German Ministry of Foreign Affairs, the Regional Cooperation Council’s Western Balkan Youth Lab project, and a regional project funded by the European Union (EU) Technical Assistance to Civil Society Organisations in the Western Balkans and Turkey (TACSO). It gave the opportunity to young people to voice their opinions on the current regional and global political issues, but also to reflect on the role of youth in the Western Balkans and provide specific input for decision-makers who need to include the youth’s perspectives in order to successfully tackle these issues.
The Berlin Process was established in 2014 as a platform for the Western Balkan 6 to accelerate closer alignment with the EU and deepen regional integration and cooperation as key to economic development, growth, and peace. The participants decided to hold the next Berlin Process Summit in 2023 in Albania.

“Women, Peace, and Security” event organized by the Ministry of Europe and Foreign Affairs in Albania

Youth Trail #8 in Tirana: “What Youth Can Do on Environmental Governance?”