Cooperation intensified: The revigorated Berlin Process and the Future of Regional Cooperation in Southeast Europe

North Macedonia – On 5th of December 2022, Mr. Blazen Maleski, youth representative of North Macedonia in the Governing Board of Regional Youth Cooperation Office (RYCO), was one of the panelists of a high official event organized by Friedrich Ebert Stiftung Foundation, Skopje, and the German Embassy in North Macedonia, in the frame of intensified cooperation and revigorated Berlin Process.

As the key message of the President of the Republic of North Macedonia, Mr. Stevo Pendarovski on the event was: “The re-actualization of the Berlin process with a new work program is great news. The Berlin process is not a substitute for full membership in the European Union, but a system to support and accelerate integration, which is the strategic goal of all six countries from the Western Balkans.”

RYCO representative, Mr. Blazen Maleski (Youth Representative of North Macedonia) gave an overview of RYCO’s work and emphasized the important role it plays in enhancing cooperation among young citizens in the region as a key driver of good neighborly relations, cooperation, reconciliation, and peacebuilding. In addition, he emphasized RYCO’s involvement in supporting the 2022 Berlin Process which was preceded by Berlin Youth Forum where 70 youths were gathered to discuss the youth agenda in Western Balkans.

As a result of the discussions, the youth gathered representing, youth councils, youth-led, youth-focused and other civil society organizations, as well as youth activists, in the framework of the Western Balkans Youth Forum 2022 of the Berlin Process, signed and presented to officials the Berlin Declaration of the Western Balkans Youth Forum 2022. The Youth Berlin Declaration has 3 main pillars: Creating Resilient Democracies Involving Young Voices, Enhance Security and Inclusive Peace in Times of War, and Ensure Sustainable Living for the Future of our Planet. Mr. Maleski ended his speech with a message that we are the ones who should work on enhancing the processes of the youth agenda to a higher level, in order to achieve more tangible results that are discussed and decided at the Berlin process. 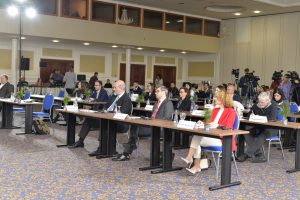 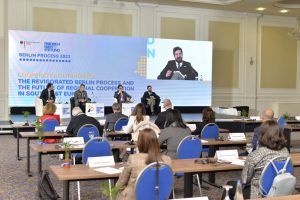 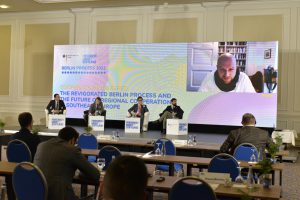 German President’s visit to Albania: Conversation with pupils from the WB Region