Enhancing capacities of the youth wings of political parties

OHRID – A three-day capacity-building training for youth wings of political parties was organized in Ohrid by the Regional Youth Cooperation Office (RYCO) and local offices of the Friedrich-Ebert-Stiftung (FES) and the Konrad-Adenauer-Stiftung (KAS) which took place from 23rd to 25th of September, 2022. The participants of the training were 24 representatives from the youth organizations of the six political parties which have members in the Club on Youth Affairs and Policies of the Assembly.

The event began with a welcome speech addressed by Mr. Vladimir Gjorgjevski, Head of Local Branch Office of RYCO in North Macedonia, who gave a short overview of the establishment of RYCO as an intergovernmental organization and its goals. He further acknowledged that RYCO is a product of the Berlin Process which was formed in 2016 and its activities are related to providing opportunities for young people to travel and explore Western Balkan countries, get to know their peers, cooperate on shared projects and empower youth involvement. He pointed out that today’s youth are the future of tomorrow and that the life and success of the nations and their future lies in the hands of the young people.

The Country Director of Friedrich-Ebert Stiftung for Kosovo and North Macedonia – Mr. Rene Schlee, highlighted the importance of youths’ inclusion in the decision-making process, hence making parallel to his homeland Germany, where youths are influential and important actor in the government decision making processes where a certain law or decision can’t be passed if young people are not involved in the voting process. This is precisely why we want to strengthen the capacities of the young members of political parties in North Macedonia to become an important factor in decision making processes and changes that they intend to bring in order to enhance their position. In addition, the decision behind organizing this event jointly with youth wings from all political parties bring added value as we believe that providing opportunities for the mutual goal of the youth wings in building their capacities is crucial.

In his welcoming address, Mr. Daniel Brаun, the Head of Office of Konrad-Adenauer-Foundation in North Macedonia and Kosovo, shared an example that in Germany presidents of the youth wings are elected independently and are not always members of political parties. In addition, he pointed out the importance of North Macedonia joining the EU family as crucial, as it will contribute to strengthening the values of democracy, human rights and opportunities for the development and advancement of the country in every aspect. The enhancement of the capacities of the youth wings of political parties is very important as they are the future of every country.
During the second day of the training, three workshops were held by the area experts who covered the modules of: online communication, no-hate speech, basics of debating, public speaking and war propaganda and infodemic as a threat and challenge to local and regional security.

The third day of the training was dedicated to a panel discussion with the members of the Club on Youth Affairs and Policies of the Assembly. The participants gained first-hand experience on youth participation and cooperation in the decision-making processes with six members of the Assembly originating from Alliance for Albanians, Alternativa, Democratic Union for Integration, Liberal Democratic Party, Social Democratic Union of Macedonia and VMRO-DPMNE. The members of the Assembly in their speeches highlighted the importance of the youth participation and cooperation in the decision-making processes by encouraging the youth wings of political parties to be united in representing the youth policies, their involvement in creating legislation, strategies, and any other proposals and initiatives that can improve the youth agenda in the country.

The members of the Club on Youth Affairs and Policies of the Assembly are the ones who represent youth policies and propose laws, amendments of laws and bylaws, new policies and any other initiatives that are in the interest of young people. The Club on Youth Affairs and Policies currently has 13 members within the Assembly and it’s a non-formal body. The Club members during the panel discussion reiterated that they are unified in representing the youth policies, regardless of political party background. In order to be more inclusive and accessible to the youths, one of their activities are organizing meetings with various municipalities’ representatives where they are involved in discussions with mayors, youth centers, youth councils and other stakeholders, so they can firsthand learn about their needs and discuss solutions for overcoming them.

After the fruitful discussion of the members of the Assembly with the youth, they were encouraged to approach them with any proposal that they may have in direction of improving the youth policies and youth inclusion in the decision-making policies. On the last day of the workshop, 24 participants received certificates for their successful participation in the program. 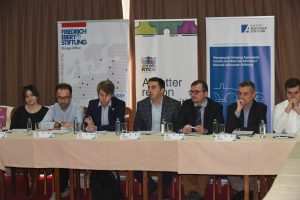 EUROPRIDE 2022 PROGRAM: RYCO IN SERBIA STANDS UP FOR HUMAN RIGHTS